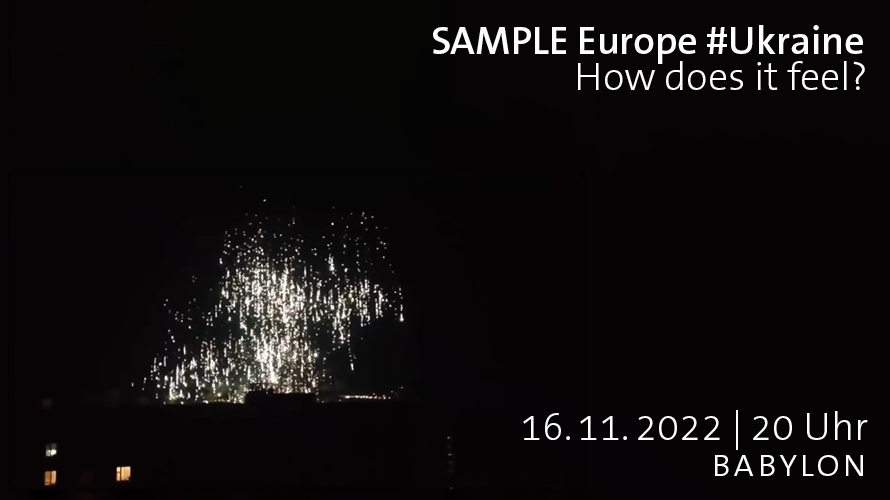 How does it feel?

As a special event within the »SAMPLE Europe« series, Deutscher Künstlerbund presents the video and film programme »#Ukraine. How does it feel?« based on a call published early this year. In the face of Russia’s war of aggression, artists in and from Ukraine were invited to submit a video work whose screening would offer them a voice and visibility.

The programme is a response to the Russian invasion, featuring videos made before and after 24 February 2022. Some of the works deal with dangers that are hard to grasp as they spread silently and subliminally within society, reflecting in different ways on forms of paralysis by melancholy or self-destruction. Other works deal directly with the ongoing war in Ukraine. The selection of videos is very diverse in terms of style and content, allowing current experiences to be discussed as variously as possible.

The works have been selected and supplemented by Ukrainian curator Yevheniia Havrylenko, herself forced to leave Kyiv in March this year on account of the war. She is currently working as guest curator for the Ernst von Siemens Kunststiftung and the HERMANN REEMTSMA STIFTUNG at Kunsthaus Dahlem, Berlin.

Since 2008, the »SAMPLE« series has been showing works from the Deutscher Künstlerbund video archive. The steadily growing archive now includes work by more than 140 international artists. The screenings foster active networking and exchange between artists.

In 2019, the series was expanded to include »SAMPLE Europe«, a format designed to promote a pluralist Europe, cosmopolitan cultural life, and cross-border dialogue between art institutions. This cooperation will be pursued in the years to come.